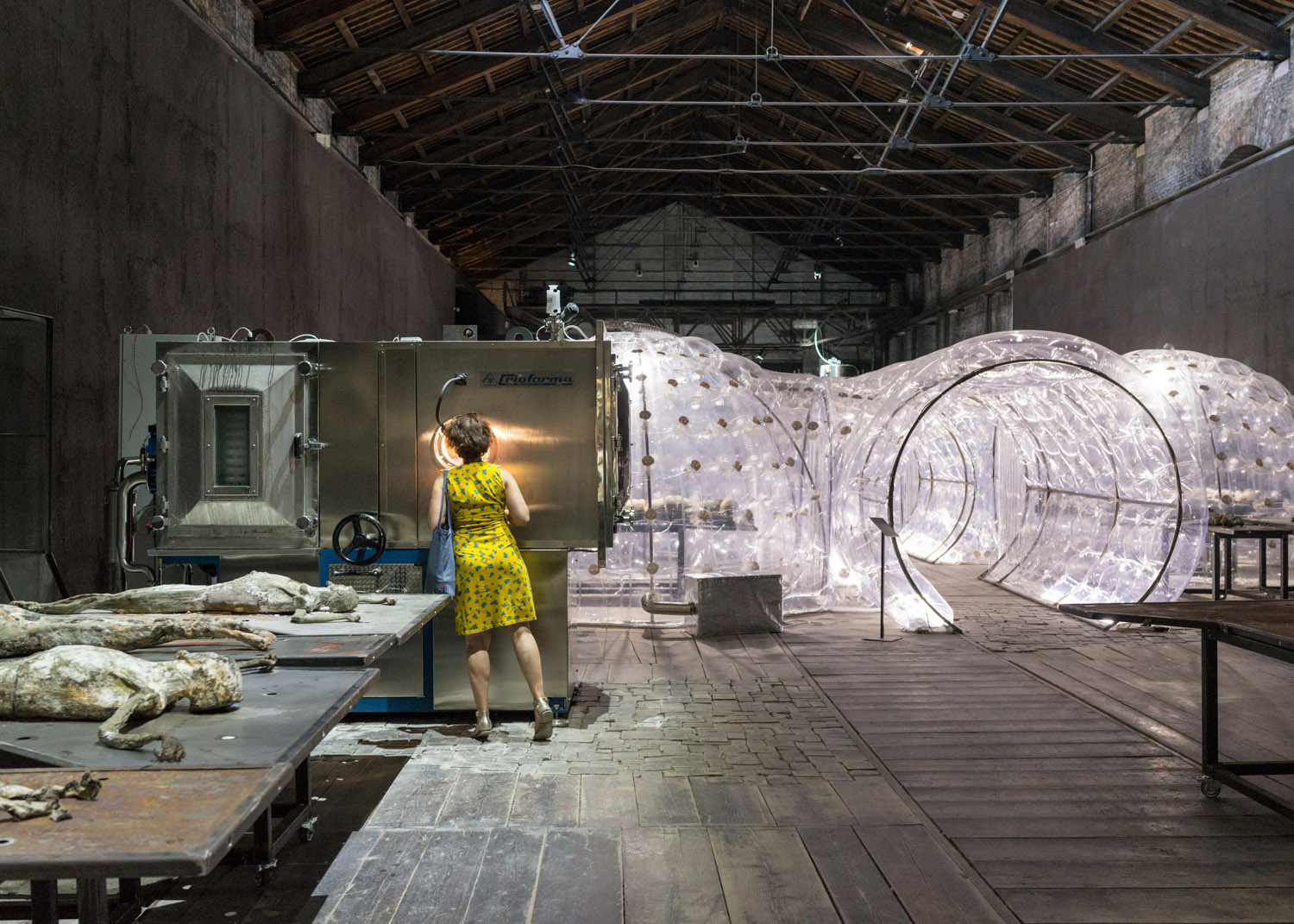 After a busy spring of work commitments, I finally have a couple of days to visit (I must admit, for the first time in my life) the Venice Biennale of Art.

We decide (I say “We” because I’m with Lorena, a Colombian girl who has never been to Venice before) for a ticket that includes the two main venues only, omitting the side exhibitions, scattered around the city. Unfortunately there is no time for those.

Giardini is a location that worths the visit itself. Immersed in the green, crossed by a canal, so many little spots to rest your legs. Basically a very nice and relaxing place.

Here are the pavilions of the various participating countries, plus a central pavilion divided into sections such as the Pavilion of Artists and Books, the Pavilion of Joys and Fears, the Special Projects and Parallel Projects.

There are so many shows using video, more as documentation of the creative process, rather than being a piece of work itself. This is not a thing I particularly appreciate because I prefer, at first, to interpret the sense of each piece without any explanation. In any case, the Swiss Pavilion can’t be missed: the work focuses on “Women of Venice” and includes a video-documentary that traces the story of one of Alberto Giacometti’s muses at an early age.

The Pavilion of Hungary entitled “Peace on Earth”, visually Pop, gives me a sense of lightness very consistent with the outside environment.

My favorite one is, however, the Austrian Pavilion where one of the two participating artists, Erwin Wurm, played and reflected on the theme of architecture as a metamorphosis with a series of really great interactive pieces.

We reach Arsenale after a labyrinth of canals and bridges (after crossing at least a hundred in three days, including those re-crossed).

There is no queue, although it is Friday and Venice is definitely fuller than the other midweek days.

One big pavilion divided into sections. I immediately lose Lorena who takes too much time to read every description of the works, rather than trying to interpret them, as I like to do.

Similarly to Giardini, Arsenale is also worth to visit just for the space itself: a renovated old naval warehouse with red-brick columns and some mechanical means mixing with the artworks.

I am more fascinated on how the pieces are placed into the space, rather than the works themselves, to tell the truth. For example “A Sacred Place” of the artist Ernesto Neto seems to be made of fishing ropes. It also impressed me the mirrors’ piece at the end of the first stretch of the path.

Further there are other national pavilions. The first of the Philippines affects me a lot, perhaps because of the heat and the hunger. Just after, a wooden house, where a constant rain falls inside, makes me breathe again and get back the appetite, before the grand finale: the Italian Pavilion with an exhibition entitled “The Magic World”.

It can be that I am proud of being Italian and I risk of passing (who cares) for the hypernationalist, but the Pavilion of Italy is absolutely the best of the best of this Biennale Art: essential but full of sense, visual, even olfactory. A great show! Congratulations to the curators, to the artists, and to all people who have contributed to create a show that makes us (re-enact nationalism) to reach the top of my unhelpful ranking of the best pavilion at the 2017 Biennale Art.

Meanwhile, I fell in love with a guide that I accidentally met at least twenty times, and in the end she decided to speak first: “I saw you earlier, I thought you were an artist ready to scold me for saying some silly stuff while I was guiding some foreigners”.

Unfortunately the train is in just an hour and the public transports are on strike, so I start walking to be on time and (I swear, by chance again) I meet the beautiful guide two times more.